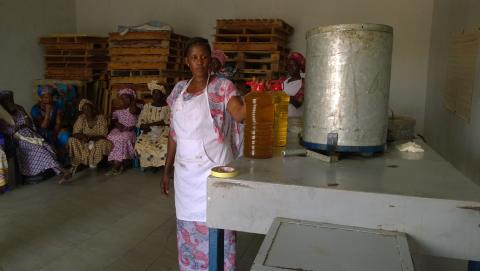 In Senegal, the groundnut sector remains the main source of income in rural areas. Consumption of this oil produced in the traditional way, commonly called "SEGGAL" is widespread in rural and urban areas. However, the presence of aflatoxin and lack of decontamination methods available to producers weaken scale processing and constitute public health concerns. To overcome this problem, WAAPP introduced in Senegal, a multipurpose manual oil extraction machine that reduces by 95% the rate of aflatoxin present in groundnut and double the market value of local oils produced.

This improved technology is revolutionizing the traditional methods on "Seggal" oil processing in some areas of the country. In the groundnut basin where it is stimulating a positive competition among women, this new technology improves the quality of traditional oil. The oil extraction machine has a 500 liter per day processing capacity. It is composed of a mixer, two settling tanks, a transfer pump, a filter bank and a recovery tank. For the dissemination of this technology, the WAAPP / PPAAO through funding from the National Fund for Agricultural Research and Food (FNRAA), the National Rural Council Agency (ANCAR) has strengthen the capacities of women associations across the country. This is the case of the Economic Interest Group of Women from Touba, a city of the groundnut basin.

"We improved our sales turnover with this machine as a solution to the problem of cancer. The funds generated by this technology are also used to finance other projects on other local products processing "says Marème Sokhna Mbacke, president of the EIG "Women of Touba". In that community more than 700 women have also improved their knowledge of traditionnal groundnut oil processing.

This association not only benefited from the processing machine but also contributes to the dissemination of this technology with some other women groups in rural areas. Ten (10) oil extraction machine were offered to women's groups in the first phase.

During the second phase, 70 units were distributed and 200 women's groups, bringing together over 102 000 beneficiaries of the groundnut basin were trained in oil processing techniques. 50 blacksmiths living in recipient communities were trained in the maintenance of the machine. In terms of financial benefits, the groups make profit from 100 francs to FCFA 250 per liter on processed oil. This technology not only generates substantial income for women but also provides a response to the public health concern due to the high content of aflatoxin in groundnut seeds. Through advanced filtering methods of the traditional oil, the multipurpose oil extraction machine reduces the content on aflatoxin by 95%.