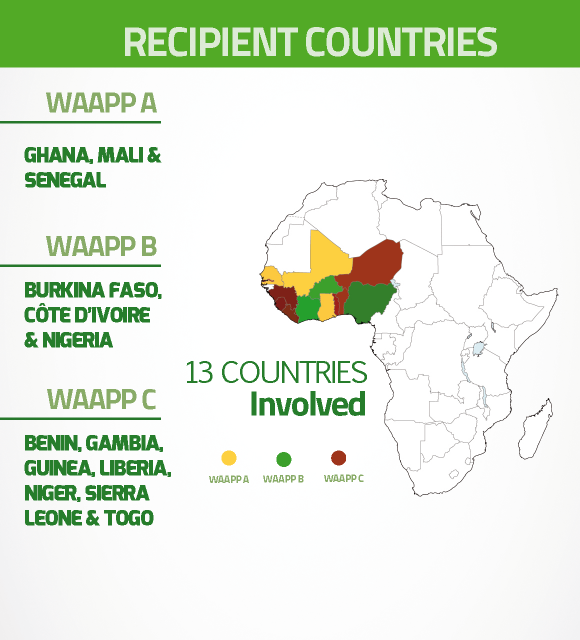 The main objective of WAAPP is to contribute to the Country Assistance Strategies (CAS) for member states of the Economic Community of West African States (ECOWAS), which recognize the increase of agricultural production and regional integration as instruments for the promotion of shared growth and poverty reduction. The WAAPP is a ten years programme implemented in two phases of 5 years each. At the first phase, the objective is to generate and disseminate improved agricultural technologies. On the basis of lessons learnt during the first phase, the second phase focuses on the intensification of the dissemination and adoption of improved technologies in the priority agricultural sectors of the countries benefiting from the program.

The countries which satisfied the eligibility criteria adhered to the program according to the following series:

WAAPP D (Mauritania, Cape-Verde & Guinea Bissau) which is in preparation.

The countries of the WAAPP A ended their first phase and are at their second. In addition, discussions are underway between CORAF/WECARD, the ECCAS’ 3 countries in Central Africa (Chad, Cameroon and Congo) and the World Bank in order to starting the Central African Agricultural Productivity Program (CAAPP).