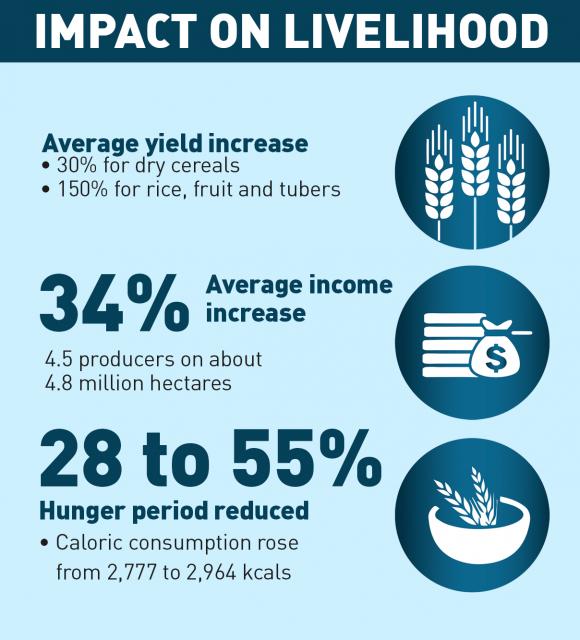 After nine years of implementation, WAAPP is evolving satisfactorily towards achieving its development goals. It has reached the stage of maturity and recorded visible achievements in the field. The exchange of technologies, best practices and innovations are being scaled up in participating countries.
More than two hundred technologies were released and adopted by almost 4,5 million producers and processors on about 4.8 million hectares. These technologies are available on www.mita.coraf.org.
WAAPP financed master degree and Ph.D. studies for 1021 youths. This represents 72% of men and 28% women. These young researchers are expected to replace most the agriculture researchers going on retirement. The nine national centers of specializations of countries participating in the program benefitted from the renovation of their infrastructure and new research laboratories were constructed. Two of the centers have been upgraded in regional centers of specialization. This includes the Dry Cereals Center based in Senegal and the The Roots and Tuber center based in Ghana.
By increasing the major crops yields between 30% for dry cereals and 150% for rice, fruit, and tubers, the program has had a considerable impact on food security and caloric intake. Caloric consumption rose from 2,777 to 2,964 kcals and the “hunger period” reduced by 28 to 55% according to the commodity. WAAPP has also increased by 34% the economic situation of farmers as well as transformed communities.
WAAPP is about to pivot to a more ambitious phase with transformation at its heart.
Expected to be launched by mid 2018, the West Africa Agriculture Transformation (WAATP) will focus on four mutually reinforcing components:

- Strengthening the new model of Innovation delivery in West Africa;