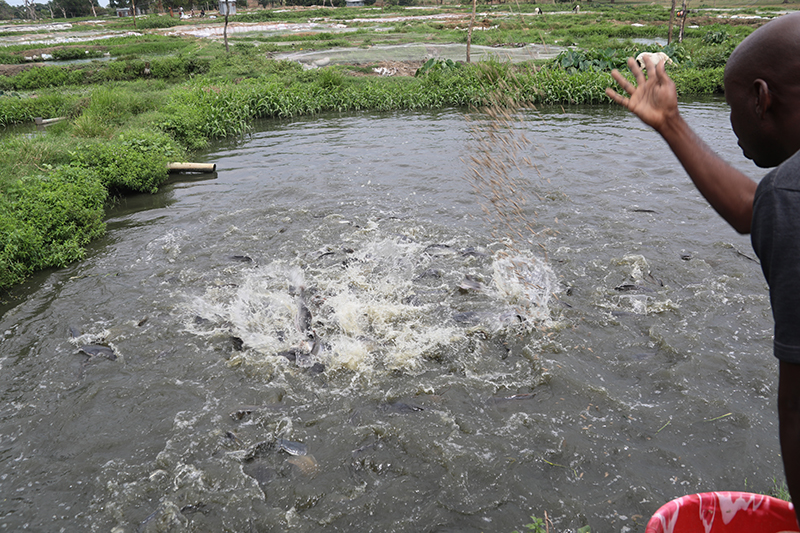 Several years after communities were trained in fish farming, integrated aquaculture, and new ways of producing quality fingerlings, thousands of youths and families have either joined fish farming or expanded their farms and as a result, increasing their incomes and livelihoods.

Alahji Rilwan Monai is a 40 years old resident of Monai village, on the outskirts of New Busan in Niger State, Nigeria. He has been in fish farming for about 15 years. At 25, he mostly fished off the Kainji Lake. Culturing fish was almost foreign to him at the time.

But things changed substantially with the arrival of the West Africa Agriculture Productivity Program (WAAPP) in 2008. Rilwan was one of the first beneficiaries of the WAAPP program aimed at introducing fish farming in Monai village. Like many others, they were taught fish farming techniques including preparing and managing ponds, rearing fingerlings, and managing water.

“I started off with two ponds, but I am now operating 13 ponds,” he says with confidence.

“I have to be honest that this has increased my income considerably. It is with the revenue that I built my house, bought my cars and now planning to marry a second wife,” says a beaming Rilwan.

For someone living in rural Nigeria with most of the population living on an average of USD 2 per day, this is significant. As a result, he sees no reason to envy his peers who are living in cities or traveling abroad.

Most rural youths in Africa seek to travel to cities or abroad in search of white-collar jobs or greener pastures.

“This has never been my dream. I make enough and do not plan to move away from my community,” says Rilwan.

“There is More Money in Fish”

39 years-old Hafsat Oladele of New Busan operates both a cement shop as well as a fish farm. After years of managing both, she does not mince words with respect to which of the activities generates more revenue for her. “There is more money in fish,” she said unequivocally when asked to compare both activities.

Oladele operates seven fish ponds of an average of 1000 catfish each. When she harvests, she makes significant income which allows her to assist her family as well as take care of her needs.

When we spoke to the many youths of Monai village, many explained that fish farming had become their major source of subsistence and employment. Almost every household in Monai, now operate a fish pond, experts say.

Exponential Growth of Aquaculture in Monai

When WAAPP was introduced in Nigeria in 2008, the three leading institutes making up the Aquaculture National Center of Specialization, picked a few villages to pilot new practices.

“When we came to engage with the village, the community Head was not too sure what we were trying to do. There were just a handful of aquaculturists in Monai back in 2008,” says Dr. Attahiru Mohammed Souley of NISPR.

Today out of about 5000 inhabitants in this village, almost everyone is practicing aquaculture.

With increased production, one may think this may pose demand challenges.

“There is a huge demand for what we produce,” says 42 Alahji Rayyanu Ibrahim.

Ibrahim’s economic comfort has reached a point where he says, he does not see himself doing anything else other than fish farm despite some of the challenges that they face.

“With my income, I can send my kids to any school that I want. I can afford the medication of my kids as well as improve the living standards of my family,” says Ibrahim.