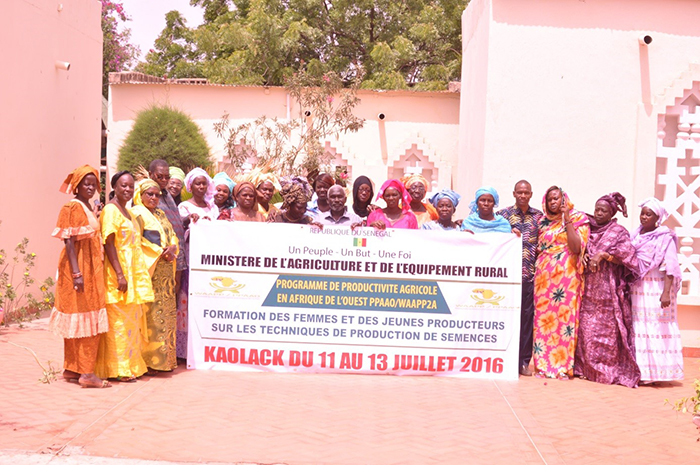 The West Africa Agricultural Productivity Programme (WAAPP) organized a training workshop on seed production techniques for female operators from Kaolack, Thies, Diourbel, Saint Louis and Ziguinchor. The session that brought together some twenty people aimed at building their capacity in the production of certified seed, particularly for cereal crops. Rice, maize and cowpea were the three crops used for the practical case studies for this training.

Fodé Sarr, the Agricultural Engineer who conducted the training, explained that the participating women first received training in seed legislation, the basis of the certification system. He added that the women also received knowledge on the relationship between the different stakeholders and on production rules and standards. In short, they received training on the technical aspects essential for good conduct of seed production.

“Today men are practically the only ones present in the distribution of certified seeds, a promissing sector that will be more open to women who can invest in both production and marketing of seeds” says Fatoumata Bintou Mbengue, Chairwoman of a cooperative of women involved in agricultural processing and workshop participant. For three days, these female producers and market operators have been introduced  to the techniques for the production of certified seed for crops such as rice, maize and cowpea in order to increase productivity. “It is generally accepted that the quality of the seed accounts for 25% and 40% in the increase in productivity for crops such as rice in Senegal. Therefore, the government has decided to produce 1.6 million tonnes of paddy rice to meet national needs. For us, the involvement of women is essential for achieving this goal” assured the Seed Specialist of WAAPP. Note that this training should lead to the establishment of seed organizations led by women for the above-mentioned cereal crops. The aim of the project is to reach almost 700,000 beneficiaries in Senegal for all agricultural technologies including a target of 40% women.