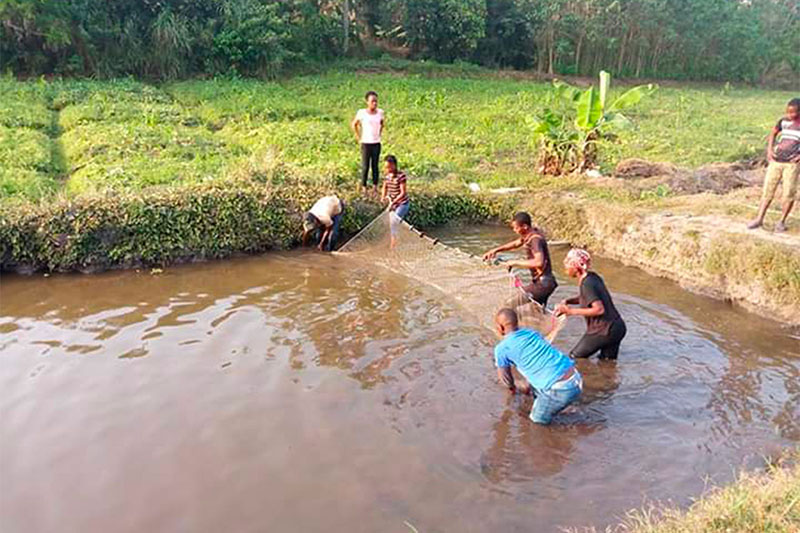 Using innovative technologies such as the Red Goat of Maradi and an integrated fish farming technique, Ismael Fataye Yannick and Yacouba Fataye are now recording an annual turnover of close to 75 million Guinean francs (USD 7,800) per year.

Put in the Guinean context where the majority of the population survives on less than USD 2 per day, this becomes a considerable revenue.

What Lift Did they Get from the WAAPP?

It wasn’t always when both decided to venture into agriculture in 2013. Living in Kindia, a large town, located some 125 kilometers northeast from the Guinean capital, Conakry, both had access to a small family plot of land. But they had little knowledge of proven technologies and profitable value chains.

It all changed when they came in contact with the WAAPP in Guinea. As part of a regional exchange of technologies, WAAPP Guinea imported the Red Goat of Maradi Technology from Niger and the integrated fish farming approach from Nigeria.

West African countries committed to a regional scheme to generate and exchange proven technologies to increase agriculture productivity and competitiveness under the WAAPP.

Ismael and Yacouba were two of the early adopters of these technologies in Guinea.

Ismael and Yacouba are specialized in agropastoral activities. They have small ruminants, produce eggs, breed rabbits, have a fish farm, and participate in market gardening. With WAAPP support, their egg production has increased three-fold.

“Before we had a production of 100 to 150 eggs per month, but thanks to the support from WAAPP, we have incubators of 400 eggs, which produces 400 chicks every month. Today, our production has tripled,” says Yacouba Fataye.

Regarding the fish farm, from three ponds at the start, they are now at 12, making them one of the largest producers in the kindia region. The growth of the company has also come with the expansion of its customers.

Increase production could post a challenge for new entrepreneurs. But, they also benefitted from a cold storage room for the conservation of their products.

An Inspirations to the Youths of Kindia

Like elsewhere in West Africa, youths make up the majority of the population. Due to limited income-generating activities in rural areas, most migrate to large cities or take risky bets through the Sahara desert to unknown destinations in Europe and the US.

Ismael and Yacouba’s success has become an inspiration for the youths of the region. Thirty-six years old Sidiki Kandé is one of the young people groomed by the Fataye brothers.

“I would like to thank the Fataye brothers for all they have done to me. They coached me on how to manage a fish farm, take care of small ruminants, as well as maintain a production farm. I fill fulfilled today as an agriculture entrepreneur,” says Kandé.

Besides, the success of the Fataye has also attracted other partners, including educational institutions.

The Fataye brothers are now partnering with the Agro-Food Department of the Catholic University of Guinea. This collaboration allows the students of the university to undertake academic internships on the farms.

For the Fataye brothers, agriculture has a huge potential, and it offers a massive start-up for the unemployed.

“Everyone can farm because we all have a piece of unoccupied land in our village. From zero franc, we can set up an agricultural project,” they said.

They called on young people to avoid risking large sums of money to undertake risky trips through the Sahara Desert and the Mediterranean Ocean to reach Europe. They should invest the money, in agriculture instead, they argue.

The Government of Guinea invested during the period 2011-2016, a total of $US 32 Million to increase rice, maize, small ruminants, and fish value chains. They got additional funding under what is commonly called in the WAAPP 1C to construct research and development infrastructural, train young scientists and extension agents, develop and disseminate technologies and innovation.

The WAAPP was a program initiated by the Economic Community of West African States (ECOWAS) with the financial support of the World Bank, to make agriculture more productive and sustainable and improve the living conditions of small farmers. CORAF was assigned the responsibility for regional coordination.