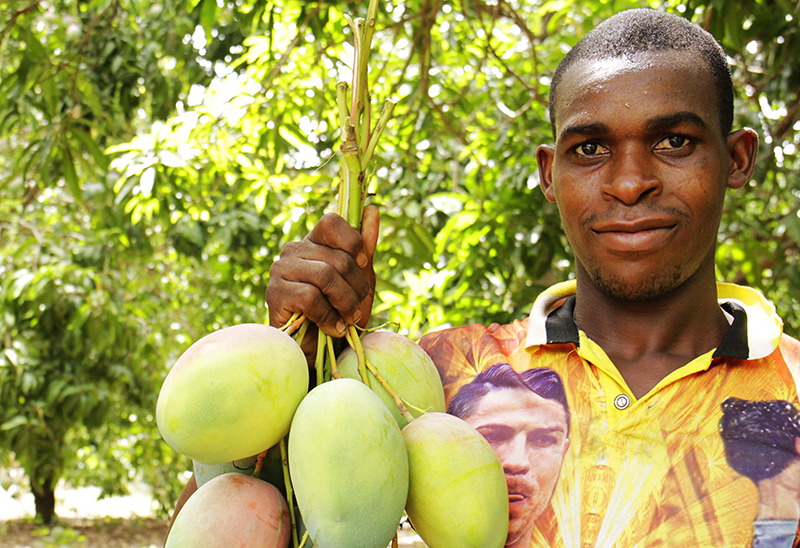 Burkina Faso mango producers have regained significant control of the pesky little insect with a history of decimating mango orchards.

With improved surveillance and control of the fruit flies, this West African country went from 90.000 tons of mangoes in 2017 to 200.000 tons in 2018, according to the Association of Mango Producers of Burkina Faso known in French as APROMAB. This represents a 115 percent increase.

Actors of the mango sector argue that such an increase would never have been possible without an ongoing fruit fly control project funded by the European Union (EU), the Economic Commission of West African States (ECOWAS), and the French Development Agency. The West and Central African Council for Agriculture Research and Development (CORAF) had responsibilities over the adaptive research component of the project alongside a few national research systems of the region including that of Burkina Faso.

“The progress recorded in recent years in terms of mango production and exports could not have been possible without the fruit fly project,” says Paul Ouedraogo, President APROMAB.

“Farmers willingness to adopt and use improved control and prevention techniques has also been very helpful in managing the plaque.”

Close to 20.000 farmers are involved in mango farming in Burkina Faso. Production covers close to 33.000 hectares of land mostly in the Southwest and Western-central region of the country. Besides the economic value to families and the states, mango production is a significant source of nutrition.

In recent years, its exports have been shipped to neighboring Niger and Ghana as well as to the Netherlands, Germany, France, Japan, England, and the United States.

Mango varieties produced and exported from Burkina Faso include the Kent, Amélie, Brooks, Keitt, Valencia, Lippens, and Springfels. The Kent ranks top in terms of demand, particularly from the European clients.

Fewer Confiscations a Sign of Improving Quality of Exports

In a further sign of the improving quality of mangoes produced in Burkina Faso, there have been fewer interceptions of exports in recent years.

In 2016 alone, there were close to 23 seizure of mangoes exported from Burkina Faso to the European markets. By 2018, this number dropped to eight.

“What this means is that our farmers are doing a better job in monitoring and fighting the fruit fly,” says Mr. Ouedraogo.

Besides the increase in the exports and production levels, the season is also getting longer. Traditionally, the mango period runs from March to May. But with better control techniques of the fruit fly, the season might stretch to June in 2019.

“Before, we could not export after May 15. But in 2019, we expect exports to last beyond June,” said Paul Ouedraogo whom we met in the city of Bobo Dioulasso, located in the Haut Bassin Region of the country in late May 2019.

Fruit fly multiplication intensifies with the raining season which occurs in late May in Burkina Faso. “But because we have gotten better at fighting the plaque, farmers can keep their mangoes slightly longer.”

Worries as the Fruit Flies Projects Wraps Up

The Fruit Flies project is currently folding up.

Burkina Faso’s experience with projects designed to support mango farmers deal with the fruit flies’ scourge has shown that once the project closes, there is the re-emergence of the flies.

For many farmers in Burkina Faso, this is already a concern. Many are worried that, the fly might return to their orchards if measures are not taken before the 2019/2020 farming season.

“I am very worried that if we do not get support during the next farming season, we might lose all our investments,’ said a proud 46-years old Sana Bata, a mango producer based in the Haut Bassin region of Burkina Faso.

“The worry with the ECOWAS project which is ending this year is that we may not have the means to continue purchasing the products and a result see the return of the fruit flies,” Ouedrago noted.

“We might have contained the fruit fly, but the fight is not over yet,” he concludes.

However, APROMAB is tackling the challenge from a proactive perspective.

“What we are also doing is encourage our members to make the treatment of mangoes a routine operation and to not be dependent solely on projects. We have to mainstream treatment issues in our core activities as producers,” says the head of the mango producers.

Producing quality mangoes is not a choice for Burkina Faso producers. Its main partner in exports, the European Union recently issued stricter guidelines for imported mangoes from West Africa.

In April 2019, the Europe-Africa-Caribbean-Pacific Liaison Committee said in a new directive that mango exporters from West Africa must verify that the mango has been subjected to an effective treatment to ensure that is free from fruit flies (Tephritidae), and the treatment data must be included in the phytosanitary certificate.

What this means is that Burkina Faso’s producers cannot afford to relent on quality.