His Dream Becomes Real Thanks to WAAPP 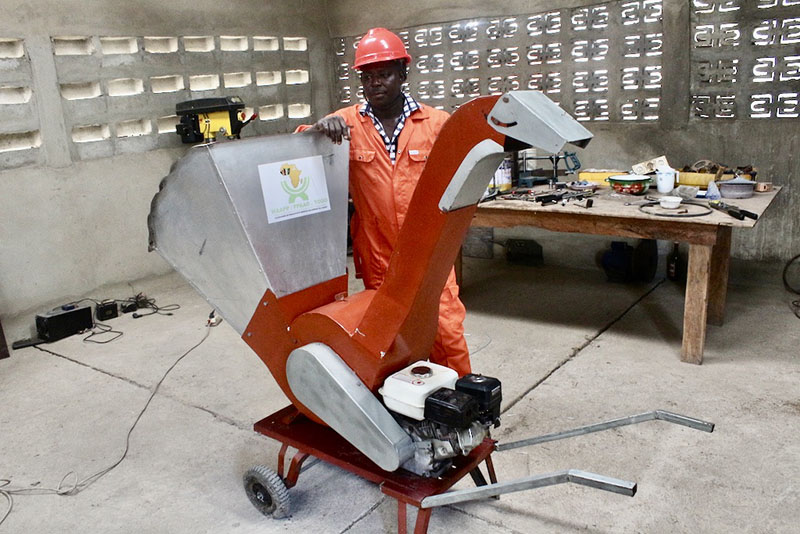 Thanks to the West Africa Agriculture Productivity Program (WAAPP), a young Togolese has considerably transformed his personal and business fortunes. From an annual turnover of 4 million FCFA (USD 6,890) before the WAAPP, Guema Concept, a company put in place by Guema M’Bantana, now has a yearly turnover of 120 million CFA francs (USD 206,710).

How it all started?

The story of Guema M’Bantana is similar to that of millions of young Africans who dream of changing agriculture and easing producers’ burdens. Thanks to WAAPP Togo, Guema’s dream has come true.

After his university training in physical science, Guema, very early on, nurtured the ambition to develop agricultural technologies that meet the producers’ needs. However, due to a lack of resources, he turned to teach physical science in colleges and occasionally worked on egg incubators production.

At the age of 37, Guema decided to devote himself to his passion by creating in 2013 the company Guema Concept in Koma in the central region of Togo. His company specializes in the design of agricultural machinery.

But despite his knowledge and innovative spirit, Guema had difficulty getting his company up and running until the day when everything changed.

“One day, I saw some women who were traditionally chopping sesame squash, commonly known as ‘goussi‘ in Ewe or ‘koutchoudou‘ in Kabyè. They were piling them up and covering them with pieces of tree leaves for two weeks to encourage the pulp to decompose so that the grains could be extracted. After drying, the grains were peeled by hand to obtain the edible almond. This tedious work exposed women to all kinds of risks and diseases. “said Guema M’Bantana.

To reduce the drudgery of post-harvest work on the squashes, Guema began designing a squash grains extractor grinder and another squash seed hulling machine.

How WAAPP Made a Difference?

Not having enough financial resources, he designed models hoping that one day they would be realized. One thing led to another, and Togo’s Ministry of Agriculture discovered him at the Young Entrepreneurs’ Fair. This is how he benefited from the support of the WAAPP-Togo, which really supported the generation of the pumpkin seed extractor and hulling machine.

With an annual turnover of four million FCFA (USD 6,890) before the WAAPP, the company, Guema Concept, now has a yearly turnover of 120 million CFA francs (USD 206,710) per year.

“Thanks to the WAAPP, I have been able to manufacture machines that are appreciated both nationally and internationally. At the same time, I acquired work equipment and recruited staff who can now take care of themselves because they have decent incomes,” said M’Bantana.

The modern squash extractors developed by Guema Concept have a crushing capacity of 7 to 10 m3 of squash in one hour without destroying the grains. The hulling machine has a capacity of 250 to 300 kg of pumpkin grains per hour.

Thanks to their ability to process squash quickly, farmers quickly adopted these new technologies. Today the company is in high demand everywhere for the supply of machines. These technologies have revived the squash sector through increased production, a sector that was previously abandoned by many farmers because of the arduousness of post-harvest work.

“I was cultivating an area of 10 hectares before I learned that there was a shelling machine. This led me to expand my cultivable area. It used to take up to a month to shell squash by hand, but with this machine, you’re done in two days,” said Agno Ognakitan, a squash producer.

These machines, produced with the support of WAAPP to reduce working hours and ease the burden on producers, have greatly relieved the work of women shelling squash. They have seen their activities boosted with these technologies.

“With the machines, we are able to process more pumpkin grains. Five bags are shelled in record time, whereas it used to take us a month. It is with this activity that we are able to take care of our families and children. “Julienne Kalentiga, squash husker.

Today the company is solicited by several countries in the sub-region, such as Ghana, Senegal, Benin, and Cameroon.

The WAAPP was a program initiated by the Economic Community of West African States (ECOWAS) with the World Bank‘s financial support to make agriculture more productive and sustainable and improve the living conditions of small farmers.

During the first phase, Togo’s government invested a total of US$22 million in increasing the maize, rice, cassava, poultry, and small ruminant sectors. At the end of the initial phase, the World Bank proposed an Additional Financing of US$10 million to the Government of Togo for the continuation and consolidation of the project activities.