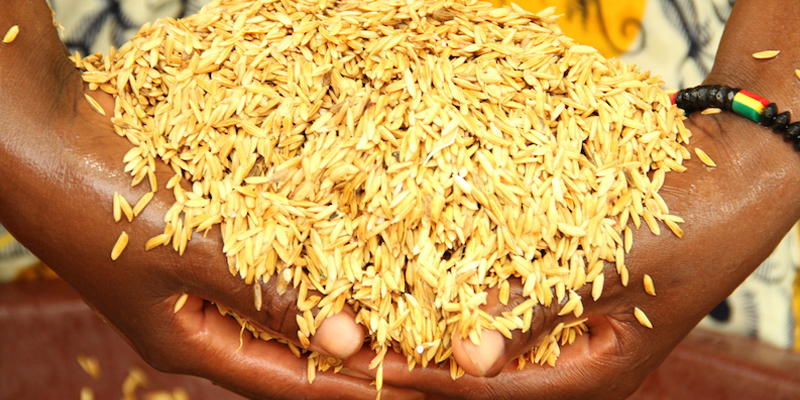 The System for Rice Intensification (SRI) has significant potential to close the rice production gap in West Africa and put the region on the path to rice self-sufficiency, according to a new book published by researchers from Cornell University and the National Center of Specialization on Rice (NCoS-Rice), based in Mali, for the West and Central African Council for Agricultural Research and Development (CORAF).

The book, “50,000 Farmers in 13 Countries: Results From Scaling up the System of Rice Intensification in West Africa,” documents the results of the 2014-16 project, Improving and Scaling up SRI in West Africa, when SRI was introduced and evaluated in farmers’ fields in Benin, Burkina Faso, Côte d’Ivoire, Gambia, Ghana, Guinea, Liberia, Mali, Niger, Nigeria, Senegal, Sierra Leone and Togo.

The authors report that more than 50,000 farmers started using SRI and more than 750,000 people benefited indirectly from the project, of whom 31.6 percent were women. By adopting the SRI method of planting rice, farmers’ yields increased overall by 56 percent for irrigated rice and 86 percent for lowland rainfed rice. The project trained 33,514 people (of whom 1,032 were technicians), and the number of institutions working with SRI increased from 49 to 215 during the project period.

“It has been a remarkable journey and adventure, characterized by commitment, hard work and genuine teamwork – the largest SRI project ever undertaken in the world, spanning 13 countries across West Africa,” said Erika Styger, associate director for Climate-Resilient Farming Systems, in International Programs in the College of Agriculture and Life Sciences, who is principal investigator on the project.

SRI is a climate-smart and agro-ecological method of increasing rice production that focuses on the management of plants, soil, water and nutrients. Practitioners are encouraged to adapt practices to local agro-ecological and socio-economic conditions.

“Although SRI was introduced to West Africa in the early 2000s, the results remained mostly at the local level. This is the first time that the impact of the SRI system has been demonstrated at such a large scale,” said Styger. “It has been a privilege for us at Cornell to be actively involved. The results speak for themselves: SRI has the potential to significantly contribute to the goal of rice-self-sufficiency in West Africa.”

For most of the 430 million people living in West and Central Africa, rice is one of the primary staples. Achieving sufficient production has been a challenge, particularly when some intensification methods are associated with the high cost of inputs like fertilizer. Sustainability and negative environmental impacts are concerns for many countries in the region, which have varied geography and natural resources. West Africa only produced 54 percent of rice consumed in 2017 and spent $4.16 billion in foreign exchange on rice imports. Achieving rice self-sufficiency by 2025 is a goal set forth by the Regional Rice Offensive of the Economic Community of West African States (ECOWAS).

The inception of the project began with Styger’s work in Mali with SRI before joining Cornell in 2010. Based on increased interest in SRI in other West African countries, she met with Gaoussou Traoré, coordinator of NCoS-Rice in Mali, as well as with representatives from the World Bank and CORAF to discuss opportunities for a regional initiative to support scaling-up SRI across West Africa.

Styger and Traoré teamed up to engage farmer, extension and research representatives from 13 West African countries to develop the project. Each of the national teams developed their own country plans, selected project zones, set national targets and created coalitions of institutions to help with project implementation.

“If 100 percent of rice farmers in West Africa had used SRI in 2017, based on project participants results, rice self-sufficiency would already have been achieved with a 5 percent surplus,” Traoré said.

The project was funded by the World Bank under its West Africa Agriculture Productivity Program and managed by CORAF under the umbrella of the ECOWAS.